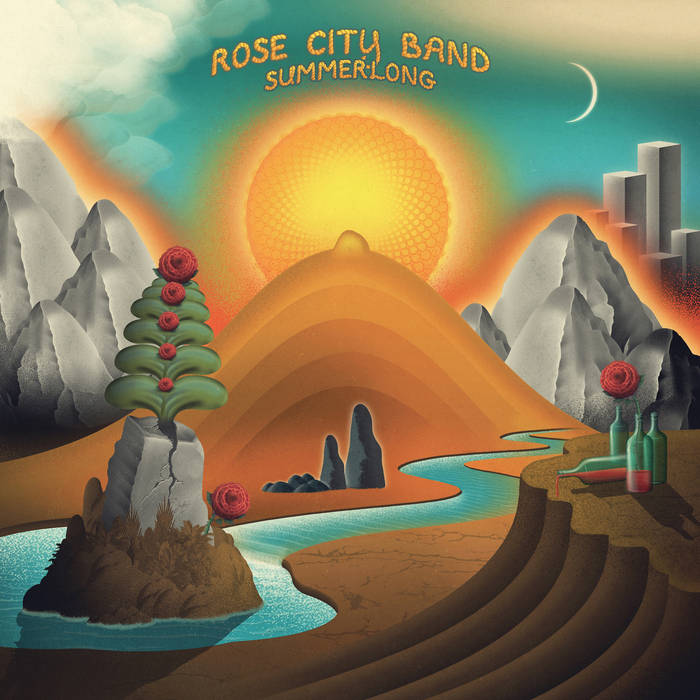 Jenell Kesler Confident countrified psychedelic musical meanderings that step outside of what one would expect, weaving infectious grooves laced with joyous chords that come off steeped in time, feeling as if they’d been forgotten or overlooked from a decade lost to space, delivering a warm comforting blanket embroiled with stars and encapsulated with beguiling dreams … just when we need them most.

It is impossible to talk about modern psychedelic music without mentioning Ripley Johnson. As bandleader of Wooden Shjips and one half of Moon Duo, Johnson has continually charted new cosmic paths that expand on the language of the genre. With Rose City Band, Johnson’s songwriting and beautiful guitar lines take center stage, the veil of psychedelia notably drawn back. While his vocal treatment would be recognizable to any Wooden Shjips fan, the sparseness of the instrumentation lays bare the beauty of his writing. Shimmering guitar lines are free to shine, buoyed by driving rhythms. New to the mix are arrangements and instruments drawn directly from classic country, resulting in songs with more than a hint of twang. The aptly named Summerlong, born of Johnson’s own fondness for the season, delivers an emotional lift—an expression akin to the joy of getting out there on a warm day, be it gathering for a BBQ, hopping onto a bike, leaping into a swimming hole, or simply reading in a park.

Rose City Band started purely as a recording project, with Johnson's role mostly obscured for the self-titled debut album. Released with no promotion, in the style of private press records, it was a liberating act, a focus on music without any expectations. Explaining it with a chuckle, Johnson elaborates, “I always would threaten to my friends that I’m gonna start a country rock band so I can retire and just play down at the pub every Thursday night during happy hour. I love being able to tour and travel, but I also like the idea of having a local band … more of a social music experience.” Freedom from expectation and obligation gave Johnson the space to experiment with new instrumentation and arrangements. The introduction of lap steel, mandolin, and jaw harp enhance Johnson’s lean guitar work with radiant overtones, placing Summerlong more overtly within the country tradition than its predecessor. Work on the album began at Johnson’s home studio in Portland during the summer, but, interrupted by touring, it would not be finished until the winter season. The dark isolation of winter and the pining for summer’s easier days can be felt in the album’s few quieter moments. Summerlong was mixed by John McEntire (Stereolab, Broken Social Scene, Tortoise) at his newly minted Portland Soma Studios and mastered by Amy Dragon at Telegraph Mastering, also based in Portland.

Buoyant and joyous, Summerlong is a captivating listen that leaves the listener yearning for more. The record is an ode to freedom, born of a musician stepping out of all routines and whose own liberation is communicated so completely in his music. Summerlong is a record that, taken in its entirety, is an emphatic statement on the songwriting power of Ripley Johnson. Johnson’s joy in every aspect of this album is delightfully infectious.

Bandcamp Daily  your guide to the world of Bandcamp